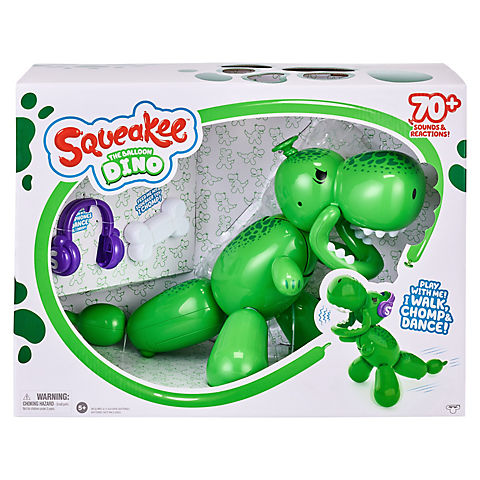 Product Overview
Meet Squeakee the Balloon Dino. He's a stompin', chompin', dancin' balloon dinosaur. This guy's inflated with fun and personality. With 70 plus sounds and reactions, Squeakee the Balloon Dino is interactive and loves to play games, and reacts to sounds. You roar at him and he'll roar back. Roar at him too much and he might run away or even pop. This playful Dino loves his Bone Squeaker Toy, as he walks and responds to its noise. Pet his nose and he'll nuzzle, and stomp or tickle him to make him laugh hysterically.

There are so many games you can play with Squeakee Dino. He loves a good game of Tug Of War with his Squeaker Toy, or maybe even play a game of Chicken by placing your finger in his mouth, but be careful, he's a quick chomper. Squeakee Dino is also an amazing dancer. Put his headphones on and watch him bust a move while he breakdances. You can even make your pet dino pop or even fart by pulling his tail, but don't worry, just pump Squeakee Dino's tail to inflate him again. 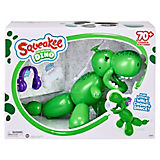