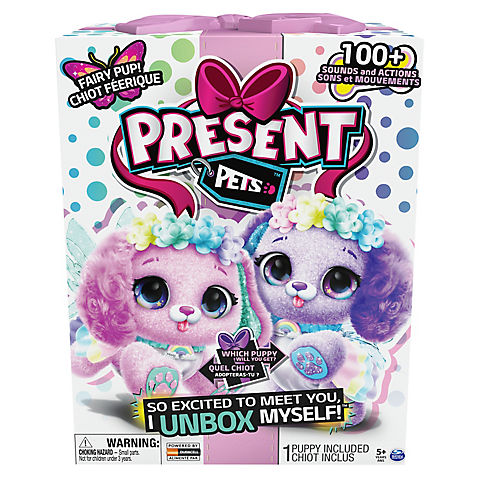 Product Overview
Present Pets are the only gifts that unbox themselves. Waiting inside each Fairy Pup themed box is an adorable interactive Poodle puppy just for you. She is so excited to meet you, she paws her way out of her own gift box. With one of two possible Fairy Pups available in every box, you won’t know which Present Pets puppy you’re getting until she unboxes herself. To start the big reveal, unwrap the box’s outer layer and pull the gift tag. The box will instantly start to shake as your fantasy pup eagerly paws her way out. The front panel pops open, revealing which Present Pets Fairy Pup is inside: Missy or Blossom.

Each Fairy Pup features a colorful flower crown, tulle skirt, iridescent fairy wings, expressive eyes and a soft push body. When she reveals herself, your pup will sing a special magical unboxing song. Discover your pet’s playful personality as you bond and play together. Pet her head and she’ll happily give you kisses and sweet coos. Tickle her tummy to get her excited to play. Her tail will wag faster, as she taps and shuffles her paws and lets out the cutest puppy giggle.

Your puppy even recognizes when you speak to her. For more fun surprises, each Fairy Pup has two themed bark-back games you can play together. In Enchanted Echo, speak to your pup and she’ll imitate you in barks. To play Magic Messages, your pup will bark a number of times. Bark back the same number of times and win. Featuring over 100 sounds and actions, Present Pets bring to life the true happiness of what it’s like to be surprised with your very own puppy. 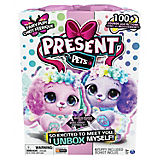