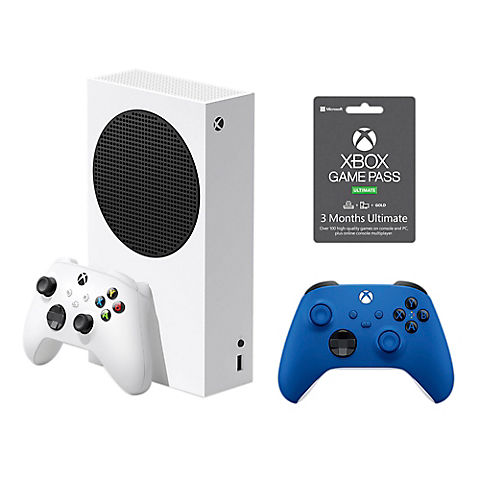 Product Overview
Introducing the Xbox Series S, the smallest, sleekest Xbox console ever. Experience the speed and performance of a next-gen all-digital console at an accessible price point. Get started with an instant library of 100+high quality games, including all-new Xbox Game Studios titles the day they release when you add Xbox Game Pass Ultimate. Seamlessly move between multiple games in a flash with a quick resume. At the heart of Series S is the Xbox Velocity Architecture, which pairs a custom-SSD with integrated software for faster, streamlined gameplay with significantly reduced load times

Experience the modernized design of the Xbox wireless controller, featuring sculpted surfaces and a refined geometry for enhanced comfort during gameplay. Stay on target with a hybrid D-pad and textured grip on the triggers, bumpers, and back case. Seamlessly capture and share content such as screenshots, recordings, and more with the new share button. Use the Xbox accessories app to remap buttons and create custom controller profiles for your favorite games. Quickly pair with, play on, and switch between devices including Xbox Series X, Xbox One, Windows 10 PCs, Android, and iOS. Plugin any compatible headset with the 3.5mm audio jack.

Xbox Game Pass Ultimate includes Xbox Live Gold and over 100 high-quality games. Play with friends on console, PC, phones, and tablets, and get an EA to play membership – all for one low monthly price. EA play gives you access to top titles on console and PC from best-loved series like Battlefield and STAR WARS. Plus, you get more from the games you love, including exclusive in-game challenges and rewards, special member-only content, and early trials of select new EA titles. Enjoy new games on day one, as well as iconic franchises like DOOM from Bethesda Softworks, indie games, and blockbusters. Enjoy free Perks, including in-game content, consumables, and more. Get member discounts of up to 20% off select games in the Xbox Game Pass library, and up to 10% off related game add-ons. Play the console games you love from the cloud on the devices you already have, all on the Xbox Game Pass mobile app or xbox.com. Tap into the heart of the Xbox community and join millions of players ready and waiting to play together.*

Redeem at microsoft.com/redeem. Play on: Xbox Series X|S, Xbox One, Windows 10, and on Apple and Android (cloud gaming). Requires: download(s), system apps, significant storage, broadband (fees may apply), and Microsoft account (microsoft.com/msa). Windows 10 requires the latest OS updates; excludes S mode and ARM. Terms: If a game is removed from the catalog, purchased in-game content requires a separate game purchase. Check your game to see if Xbox Live Gold is required. Except as required by law, codes are non-refundable. Stack up to 36 months per account. Images are representative of catalog games. 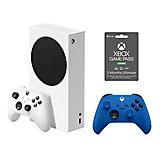